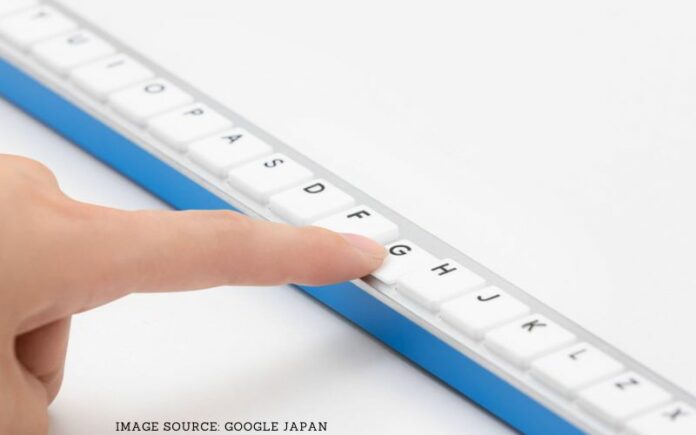 Engineers from the Japanese division of Google have developed a keyboard in which all the keys are arranged in one row. Since this is a joke project, the company will not release a serial version of the gadget, but the developers have published instructions, drawings and other data on GitHub that allow anyone to create such a keyboard.

Modern keyboards differ in materials, the mechanism under the keys, and other factors, but their essence is almost the same as the keyboards of the first computers and even typewriters. So, the QWERTY layout, the most popular today, was invented back in the 19th century. But such a common item, used everywhere, cannot but attract the attention of engineers who want to improve the user experience of many people around the world. Among the recent (for such a long-lived technology) innovations in keyboards to help users is the backlighting or swipe method used in virtual keyboards in touch screen devices.

But innovation doesn’t always happen for the purpose of improvement. Employees of the Japanese division of Google have been presenting unusual keyboards for ten years. Previously, they were presented on April 1st, and this year the engineers introduced a new keyboard on October 1st. They explained this by saying that if you write this date in numbers, you get 10.1, which is consonant with a 101-key keyboard.

The new keyboard differs from the usual ones in that all the keys are lined up in one row. Because of this, its length is 165 centimeters. Engineers have created both a QWERTY version and versions with alphabetical order, Japanese characters, and emoji. Under the keys there are 16 boards and one control module (the developers used ProMicro and M5StacK microcontroller boards). Engineers have published documentation, firmware, and drawings on GitHub so that anyone with minimal DIY skills can create the same keyboard.

In addition to the usual text input, the engineers suggested using the keyboard for everyday tasks, for example, its length allows you to reach the switches in the room without getting up from your workplace.

Sometimes such April Fools’ projects become a real product. Last year, Stack Overflow, a popular programming site, unveiled a three-key keyboard design (Ctrl, C, and V) that plays on the fact that many programmers, especially beginners, copy code from questions on the site when looking for solutions to problems. Six months later, the service announced that it would release a mass-produced device for $29, and in May 2022 introduced a second version with color backlighting.