How to repair corrupted VMDK files? 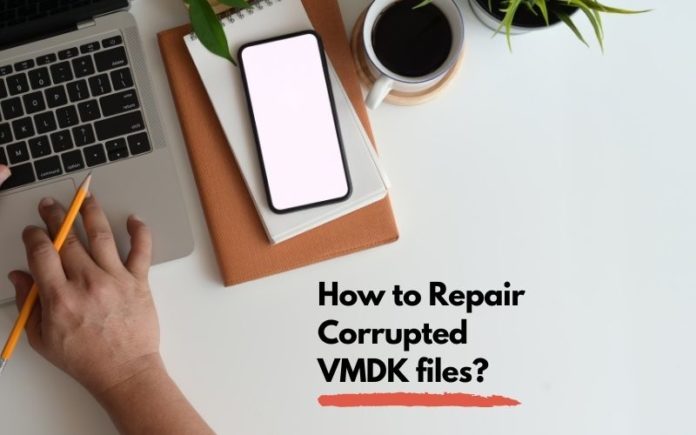 Virtual Disk Image Files are used to store data in virtual machines such as VMware Workstation, QEMU, and Virtual Box. It is commonly used in cloud computing and virtualization. In other words, it is a direct rival to Microsoft’s VHD file format.

VMDK files, like VHD files, are prone to corruption, and recovering a VMDK file may be difficult because it holds all of a disk’s data, and any faults in the recovery procedure might result in data loss. As a result, restoring faulty VMDK files is critical to preserving the entire disk’s contents.

DiskInternals VMFS Recovery can help you to repair files so you have your data back; yes, it can also recover files from damaged or formatted disks.

What is a VMDK File?

VMDK, which is short for Virtual Machine Disk, is a file format for files saved in a virtual hard disk drive. The file format is supported by virtual machines like VMware, VirtualBox, Workstation, QUMU, and XVM.

The VMDK file format has a few similarities with Microsoft’s VHD and VHDX formats used on virtual servers. All information and content of a virtual machine are saved in VMDK format on regular hard disk drives.

It is important to note that a file can be fixed or dynamic. Also, VMDK files can amass huge data – can contain up to 62TB of data. Most times, a file can be the same size as the corresponding virtual hard drive. So, if a VMDK file is corrupt, a whole lot of data are on the verge of being lost forever.

Files can get damaged for a variety of causes, regardless of whether they are kept on virtual computers or traditional hard disks.

Developers that work with huge data sets are particularly prone to data corruption since they deal with a high number of files and must also contend with a significant number of harmful files. The following are some of the most common causes of VMDK file corruption:

How to Repair a Corrupt VMDK File

Before proceeding with the steps to VMDK repair, it is important to point out that the VMDK format comprises two file types:

VMDK is the plain text pointer for the *-flat.vmdk, where (*) represents the name of the VM server. If what you’ve got is a corrupted .vmdk file, which locked you out from starting your virtual machine, then follow the guide below to fix the file.

In VMware, repairing .vmdk files is as simple as adding a disk to the virtual machine and setting the disk to utilize the existing .vmdk file. This procedure, however, will not restore -flat.vmdk files.

VMware files are also prone to corruption, therefore your VMDK file might be damaged. When you utilize the DiskInternals VMFS Recovery program, even a corrupted VMDK file may be fixed and recovered.

DiskInternals VMFS Recovery is a professional software application built to help both experts and newbies perform VMDK recovery and repair easily. The app is several times faster than its closest alternatives.

More so, asides from VMDK file repair and recovery, the Recovery software app has other outstanding features, which include the following:

Now, hereunder is the detailed procedure on how to repair corrupted VMDK files using VMFS Recovery.

On your PC, download and install the software app, then run it. Connect the VMFS drive after the startup; there are a number of options for connecting VMFS disks, including:

Scan the VMFS disk to discover all the files inside, including the corrupted VMDK file you need to repair. When the scan is completed, mount the corrupted file with .vmdk expansion – as a disk.

Finally, to repair/recover your corrupted VMDK file(s), you have to upgrade to a paid version of DiskInternals VMFS Recovery.

With the DiskInternals VMFS Recovery program, you can fix any corrupted VMDK file and have access to your VM’s files, once again. The program is easy to use, and it comes with a ton of handy features/tools.

Google to shut down Hangouts messenger in November 2022